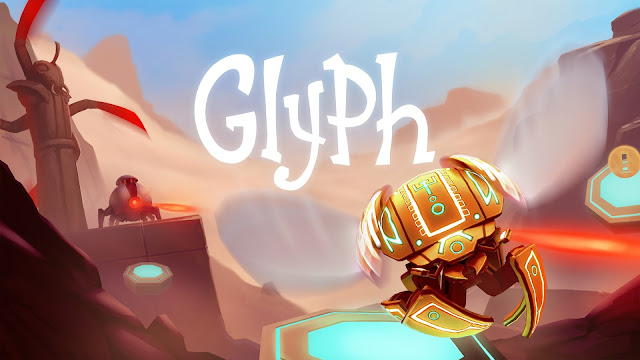 Originality is the name of the game when it comes to Glyph, and this charming 3-D puzzler has heaps of it. From the inhabitants of the world to it's the perfect blend of puzzles and platforming, Glyph is a game that every Switch owner needs to experience and explore.
Developed by Bolverk Games, Glyph tells the story of a world besieged by a vast desert and a rogue A.I. You play the role of Glyph, a charming robot who's purpose is to restore an ancient temple which lies in the heart of the desert which also serves as the game's central hub. While the task sounds simple, our scarab beetle robot will have to navigate this vast landscape using precision and speed to collect the items necessary to restore the city. With the very landscape as Glyph's enemy, one false move can most certainly cause the tiny robot major harm.
On first glances, the story to Glyph is a pretty standard post-apocalypse affair. An advanced A.I. created by an unseen race turns on its masters, corrupts other robots and then covers the world in sand. Yes, it's a story that's as old as video games themselves. Thankfully Glyph does a lot of its storytelling right and keeps enough intrigue to keep it feeling fresh. Throughout the journey, you revisit a central hub which is the very city we're trying to save. As you progress this vast structure begins to unravel itself from its sandy tomb. It's a great site to see and give you a sense of progression throughout Glyph's many levels and trials.
Through the journey, Glyph is joined by mentor and ally - Anubi. Anubi is our guide through the tutorial level and is also hidden in almost every level to reveal some guidance to the world around us. Whilst Anubi does offer a lot of invaluable help, their speech bubbles can feel a little invasive when on the screen. This is more prominent whilst playing in Handheld mode. But, apart from being a little bit distracting, they don't affect the gameplay too much to be an issue. 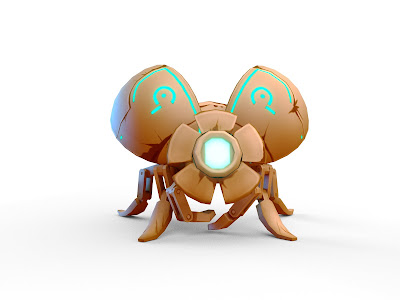 From a gameplay perspective Glyph feels a lot like Marble Madness. You control Glyph as the robot is in its ball configuration. This allows you to roll about the environment, bounce and jump from obstacle to obstacle. What sets the game apart from other platformers is your ability to transform. On occasion, you'll have to transform Glyph into a scarab-like configuration to glide over gaps. It's a great idea which is both helpful and unhelpful at the same time. On occasion, the momentum of the glide sent me flying in the wrong direction to then plummet into the sandy depths below. However, it's a fun addition and breaks up the constant rolling.
Glyph also features a vast amount of individual levels for us to work through. Accessing these levels all stems from jumping into portals on the hub of the world to then be whisked away to the area. What I found slightly puzzling is in what part the game considers itself to be 'open-world'. Sadly apart from choosing from what order to unlock levels, Glyph is very linear. From what I gathered (with a fair bit of assumption) is that the 'open-world' aspect is down to both the order of unlocking areas and how you spend your coins and gems. If I'm correct then this sense of an open world feels much more akin to games such as Mario 64 and Super Metroid - you're given a push but not outrightly in any direction. 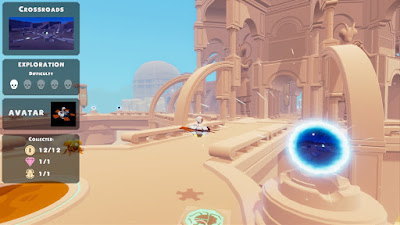 The stages themselves are pretty well designed and have a wealth of items to collect. As mentioned earlier, Anubi is also present on the exploration levels and hints towards various secrets and tidbits of lore. Whilst I'm not a fan of secret hunting I did attempt to find a few as they unlock some pretty cool looking cosmetic items for Glyph. Aside from the exploration levels, there's also the generic time trials to complete as well. These time trials are exactly that, a race against time to beat the level. Whilst they're not intricate to finishing the game, doing so can unlock a set of trails for you to equip.
The stages can take anything between 5-15 minutes to complete depending on your skill level. Glyph isn't a particularly easy game to play and some levels can be downright frustrating at times. Controls are pretty straight forward and feel smooth and responsive. The only struggle I had was slamming too early when in the air. Thankfully there is a handy onscreen icon to help with depth positioning so once I got the hang of it, I was zipping about here, there and everywhere. 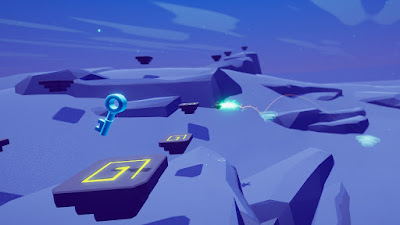 There are no checkpoints in the game and as such, each area has to be completed in one sitting. This can feel a little frustrating, especially if you're on a, particularly difficult set. If the worse does happen and you die you also have to start the current stage from the beginning. To offset this, already collected items remain in your possession so you don't need to backtrack. You're also not alone and some stages feature enemies that we need to avoid. Dealing with these isn't particularly fun and can spoil the experience on the more challenging levels. There's no easy way to avoid these enemies and luck play a big part in doing so. On multiple occasions, I was blown off the path to then have to restart the current stage again. It's a shame however as the levels themselves are well designed.
The visuals in the game are particularly well done. Glyph and the other robots are incredible to look at and feature minute detail on their chassis. Considering the world is a vast desert, it too looks particularly well made. I often wondered what the world looked like before the apocalypse and it would have been great to explore it. 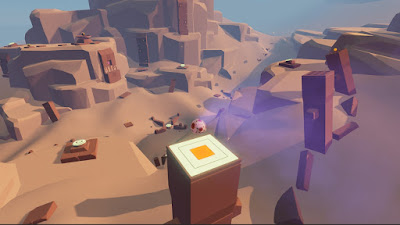 Glyph is a game that I'd highly recommend. Whilst it has its frustrating moments, it does a lot of things right. It controls pretty well, has well over 80-levels, and a tonne of collectables to be found. While the occasional frustrating moments, can dampen the experience for unskilled players, Glyph is still a game worth playing. It's a game full of life and charm, all wrapped up in a story of man's creation gone mad. If you're a fan of platformers then Glyph will keep you busy for a few days at least. If you're not a platforming fan, then this one won't change your mind...although it does try.

Rating 8/10
A review code was kindly provided for this review.
Rob Lake - For more comic book and video game chat why not follow Geek Culture Reviews on Twitter and Facebook @GeekCultureRev

Popular posts from this blog

June 28, 2022
Rob reviews Battle Action Special... When it comes to British comic books both Battle and Action cemented their names in the memories of many children throughout the 70s and 80s. While Battle , Action,  and their many incarnations are now but a distant memory, the publication's legacy lives on through its influences within the current 2000 AD weekly Progs. 2000 AD fans will already know this as both Battle and Action were helmed by 2000 AD creators;  Pat Mills and John Wagner . Now, 34 years after its final issue Battle Action is back! Written by Garth Ennis and illustrated by a wealth of artists such as PJ Holden, Kevin O'Neill, John Higgins , and Mike Dorey , this Battle Action Special anthology aims to celebrate the legacy of one of comics' golden oldies.  Featuring seven self-contained stories set around World War 2, Battle Action Special is an action-packed thrill-ride along side some familiar faces. Characters such as Crazy Keller, The Sarge, Johnny
Post a Comment
Read more

November 13, 2022
Rob reviews The Best of 2000 AD Vol. 1... The Best of 2000 AD Vol. 1 is a quarterly graphic novel that promises a mix of material across the publication's diverse history. Collecting both classic and modern strips across 6 volumes, ' The Best of... ' aims to entice new readers into discovering why 2000 AD is synonymous with British comic books.  For new readers, it's the perfect gateway into the vast 'Thrillverse'. Not only does it dispense with the serialized nature of the 2000 AD Progs for a graphic novel presentation. It also doesn't require any in-depth knowledge of the characters to simply pick up and read. For existing 2000 AD fans it's also perfect for reacquainting yourself with old friends or reminiscing about stolen youth.  Until the last couple of years, I've never been an avid reader of 2000 AD. While I'm familiar with characters such as Judge Dredd and Rogue Trooper, I never paid any attention. Instead, I was drawn into t
Post a Comment
Read more

May 11, 2022
Rob speaks to 2000 AD writer Kenneth Niemand about Kyle Asher's return in 'An Honest Man'... Back in Prog 2225, we were introduced to ex-Judge Kyle Asher, who's returned to Mega-City One after spending the last twenty years on Titan. Throughout the 6-part story, we saw Asher fall foul of the Special Judicial Squad and their "Welcome Wagon" - a conspiracy which saw the SJS increasingly harass Titan returnees until they left the Meg - or worse. Naturally, this action also caught the steely eye of Judge Dredd, and as such, the Lawman aimed to close the project down. Jump forward to Prog 2281 and Kyle Asher our ' A Penitent Man ' is back in ' Judge Dredd: An Honest Man '. This time around we follow Asher as an ordinary Resyk clean-up turns into anything but... I recently spoke to writer Kenneth Niemand about what he has in store for Asher in Judge Dredd: An Honest Man , and what's coming up from the seasoned writer in t
Post a Comment
Read more